One simple solution – take away their weapons!

One simple soluion to the systematic abuse of our children would be to ban teachers from taking the canes into the classrooms and into the schools.

Just look at many school parade grounds at morning assemply and you see teachers strutting around like concentration camp guards, weapons at the ready, seeking out their latest victim.

Many Thai teachers claim they need the sticks to “point at the blackboard” but anyone who has any intelligence understands that this is just an excuse. After all teachers in other countries dont need them and Thai teachers have arms and fingers the same as those teachers.

Of course banning the canes will not stop teachers abusing children using their hands or rulers or other implements but it would go a long way to sending the right message that modern society will no longer accept teaching by fear.

It is ILLEGAL for teachers to use these weapons so why is it OK for them to carry them?

It is no coincidence that the vast majority of the Top 100 performing schools have outlawed corporal punishment and do not allow teachers to carry weapons.

Mr Phansak Thanpo is a teacher of Western music at Angthong College of Dramatic Arts.

In May 2011 admitted caning several girls for failing schoolwork. Some of the girls were caned up to 57 times each. The incident came to light after one parent reported Mr Thanpo to the police and it was then covered expensively in both be Thai and International media. This forced the school to cancel a second caning of the same girls that had been set for the following week. Initially Mr Thanpo refused to cancel the 2nd caning claiming that he was within his rights and that no one could stop him.

Clearly Mr Thanpo is unfit to be a teacher as he appears to have no idea of the law governing the teaching profession. We believe Mr Thanpo should be prosecuted and jailed for this offence.

We have no photograph of Mr Thanpo but you can see him in this video. He is the teacher wearing the pink shirt. 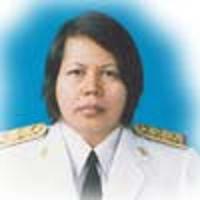 Kanya Thongman (นางกัญญา ทองมั่น) is the director at the Angthong College of Dramatic Arts involved in the serious, and  illegal, caning of several girls in May 2011 by a music teacher at the college.

When the incident was first reported Mrs Thongman was uninterested in taking any action according to one girls father,  Mr Boonlert. He also stated she replied that she agreed with the teacher and was (apparently) initially sanctioning the further caning that was planned for the 31st May 2011.

Mrs Kanya only started to take the matter seriously when the incident was reported to the police and received widespread national and international news coverage.

She (allegedly) persuaded Mr Boonlert to drop the charges with the police in return for the 2nd caning being cancelled and also promised an internal school disciplinary investigation into the teacher, Mr Phansak Thanpo.

Ms Kanya said if the disciplinary investigation finds Mr Phansak guilty, he will face punishment ranging from disciplinary probation or a cut in pay to suspension, removal or dismissal.

Question? How can he NOT be guilty? He admitted the offence!

Caning is banned in schools but she believed it is sometimes justified!

This raises very serious issues about the competence of Ms Kanya to be a director of a school, for the following reasons.

1. She clearly has NO understanding of the law! It is BANNED and ILLEGAL and therefore there can NEVER be any “justification”. Any management position in any profession must have a clear understanding of relevant law. This is especially true when the law is there to protect the vulnerable i.e. children.

2. Children in her school are clearly at risk of assault if she believes it is “OK sometimes”.

3. Justified?? Does this mean that people who have no money can sometimes be justified to rob a bank or steal from a neightbours house?

4. WHY did she intervene in a criminal investigation and why did she attempt to stop this. The police MUST be allowed to do their jobs in cases of alleged child abuse.

It is our belief that the Ministry of Education or the Ministry of Culture (who the school is under the auspices of) should launch an immediate investigation into Ms Kanya Thongman and if she is found to be incompetent, or guilty of attempting to protect a child abuser from prosection, should be immediately dismissed and perhaps prosected herself.

Teachers must OBEY the law at ALL times and school directors have a duty to ensure they are 100% AWARE of the law that governs their profession. They also need to take responsibility for the actions of their employees and Mrs Kanya should NEVER have attempted to stop the police investigation or prevent this man from being tried in an appropriate court of law.